I have been pretty busy during the week, so I haven’t had much time to see the city. Ramadan has started so it is getting hard to do a lot after work because I often am too tired from fasting and go to sleep right after I break my fast at sundown . What has helped is that more recently a lot of the work has been remote. I have been doing my fieldwork one or twice a week while going to the office more often, or sending reports remotely.  I had a weekend off, and so I visited one of the most famous sights in Kolkata, the Victoria Memorial. It was really beautiful and I was able to stay quite a bit. It has been very interesting witnessing the relationship of India and its colonial history. Often times talking to people there i have found a sense of disdain towards this colonial past, rightfully so, but there is still a lot of respect surrounding monuments and buildings that are remnants of that history. I guess it is interesting because at a same time this is still a very real part of national history and as Shruti described it, a reminder of gaining that independence and the work it took to do so. I guess it would be dishonest to ignore that past, because it has impacted why the country is the way it is today, even if that impact was not necessarily positive. 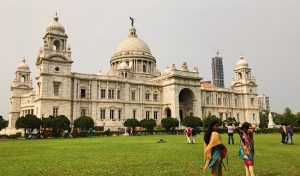 The Victoria Memorial itself was beautiful, its extremely grand and has a museum inside of it with paintings, wax scenes, and statues. The surrounding grounds and gardens were even more beautiful, as they act as a place for families to gather for picnics on Sundays. I was able to sit in front of the water a bit and read, as well as stroll through the gardens. It was really ironic as one of my first few day in Kolkata, my Airbnb host told me to go to college street which is an entire street filled with vendors selling books. I came across Bhagat Singh’s jail notebook and other writings and bought. He was considered to be one of the most influential revolutionaries in India’s independence movement. The irony of reading his Jail notebook in front of the Victoria Memorial was kind of chilling and made me really aware of the space I am in and the history and struggle surrounding it. 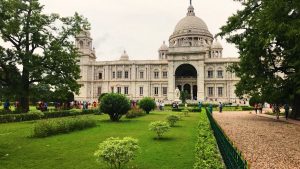