Though I don’t have enough time to travel outside of Kolkata,  the city has so many beautiful buildings and spots that I’m not sure if I will be able to visit all the places I want to in time. One of my favorite visits was the Birla Mandir. I was in the Sanlaap office one day and finished work early and so I walked around the area to explore and realized I was quite close to it. The architecture of the building was truly breathtaking, the style of the temple was so unique and unlike anything I have seen before. There was no photography allowed in side because it is a religious site, but one of the guards was able to take my photo outside the temple. 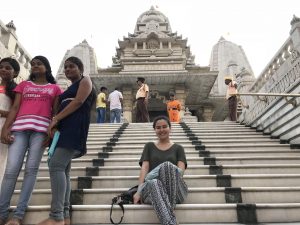 The day was filled with very interesting encounters because I had passed by this tea house that looked very nice. I was fasting and so just walked around the neighborhood while waiting for sundown. I walked in and looked at the menu for a while trying to pass the time. When I finally ordered a tea and meal, the tea came right in time. The waiter was extremely nice and asked me to try it infront of him and let him know if the temperature, flavor, and sweetness was all fine. After taking a sip and telling him it was great, he gives a thumbs up gesture to a line of waiters on the other side of room, who proceeded to clap at my response. My meal came a bit later and it was really amazing (as most of the meals in Kolkata were). In the middle of my meal, the waiter came back followed by the chef, and he introduced him to me. I was quite surprised but of course thanked him for the amazing meal, but then he thanked my for my comment! After then I realized that the restaurant probably assumed I was a food critic/blogger as I was on my phone and chatting with my sister during my meal, and sending her pictures, so it may have looked like I was taking notes. It was a funny story to look back on, especially when they had me sign a guestbook at the end! Maybe they  just had impeccable service? But really, I had some of the best meals of my life in Kolkata, which was definitely really nice to look forward to while fasting. The foodservice industry is something else!!! On top of that, my Airbnb hosts were extremely supportive during Ramadan. One of the hosts offered to wake me up before sunrise which is when I eat before I start my day. Of course I told her not to worry as I just used an alarm, but one day I came home and she made my a traditional dish that Indian Muslims eat during this time, which she asked her Muslim friend how to make. It was truly such a sweet gesture and made me so happy.